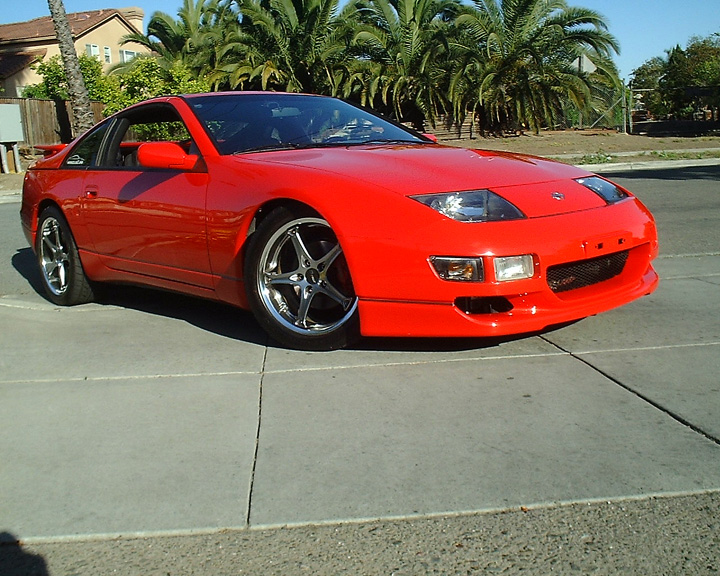 What better way for a gearhead/ automotive enthusiast to spend a Saturday in Southern California than to hang out with the vendors at the Specialty Equipment Makers Associations International Auto Salon. Say that fast ten times. We went in at 10 AM, 2 hours before the general public was allowed in to look at all the new trends, new parts, new technologies, and future innovations. There were too many cars to take pictures of some nice, some rice. Most of the sport compact car vendors were there in force peddling their wares. Of course, there were the women. Come on guys, not to offend the ladies out there, but how else to get the race driver in us motivated than to see beautiful women posing in front of awesome fossil fuel combusting 4 wheeled dream machines. BF Goodrich also had a small autocross course set up in a parking lot behind the convention center. They had 3 vehicles for us to burn rubber around the course-- a Nissan 350Z Enthusiast model with automatic transmission, a Subaru WRX STi 6 speed manual, and an Acura RSX Type S 6 speed. We compared the newest BFGs with a comparable set from Dunlop. The difference was definitely pronounced when taking the cars around the course. They had a set of BFGs on one car and then the Dunlops on it's twin for comparison. All in all, it was a great time and I just can't wait for SEMA in Las Vegas this coming November. Enjoy the pictures.

This is the view from the top of the escalator down towards the lobby of the Convention Center.

The view into the main exhibition area from outside the glass doors.

Ferrari Enzo that belongs to the owner of West Coast Customs in Manhattan Beach. This is one of two that he owns. He also owns a yellow one. It must be nice to be rich.

Other Hondas and Acuras

Chrome whore to the max.

Someone forgot to remove the car cover, or, it's some secret rice project.

One of many Cadillac Escalades.

Another Cadillac Escalade with spinning rims. Hey wait, it's the infamous severed head. How did he get into the picture?

One of many Scion Xbs.

Awesome interior in this Nissan Armada SUV. I want those seats.

Rhys Millen's Pontiac sponsored GTO drift car. I was lucky enough to see and hear this beast in action at the D-1 drift event last month. Go check out my coverage on the D-1 event. The funny thing about this car was that it had some Japanese parts installed as well.

Shaq's Escalade that is now owned by DUB magazine. .

Some seats available from Recaro.

Some of Enkei's rim offerings. Guess which one are my wheels.

Of course, no car show is complete without beautiful models. =)

The BF Goodrich Girl. She was my personal favorite in the show.

She wasn't one of the models. She went to the show with her boyfriend. I didn't know so I snapped some pictures. I found out later that she was just there for some pictures. I hope her boyfriend wasn't mad at me. Just remember, if you pose on a car like a model, we are going to take pictures of you like you we would for a model.

The girl in green was one of the Tein girls.

Yours truly hamming it up in front of the camera. Of course, I couldn't leave the show without getting a couple of pictures with some of the models.

I would have to say that I got the severed head's seal of approval for SEMA. Look out Las Vegas, we'll be there in November... Viva Las Vegas.